William-Adolphe Bouguereau was considered the best painter in the world during his lifetime, but he also “considered teaching his sacred duty.” In fact, he taught at multiple places during his lifetime, both in his own private atelier (artist’s studio) and in the ateliers of the Ecole des Beaux-Arts and the Académie Julian. He didn’t charge his students a high price for their tutelage; instead, they seemed to have worked off their debt to him by working as his assistants on his monumentous Salon paintings.

The Ecole des Beaux-Arts was THE  — if you wanted to be a successful artist, you attended the Ecole. There were entrance exams, conducted only in French, which was discouraging to the many foreign students who came to Paris to try their luck at the life of an artist. The school, however, was worth the work: it offered great benefits, what with its fantastic reputation and reputable professors. The Ecole held a famous contest every year called the Prix de Rome, for which the winner received a scholarship trip to study in-the-flesh the works of the great masters in Italy. (As you may have guessed, Bouguereau won the Prix de Rome when he attended the Ecole.)

Because of the tricky French entrance exams, many American students in particular went to the Académie Julian instead, where one only had to pay a fee to be accepted. You might think this would imply that the Académie was not as good as the Ecole, but in fact, the schools’ reputations were both extremely high. The Académie was known to be revolutionary, even, because it accepted both men and women, whereas the more conservative Ecole did not. 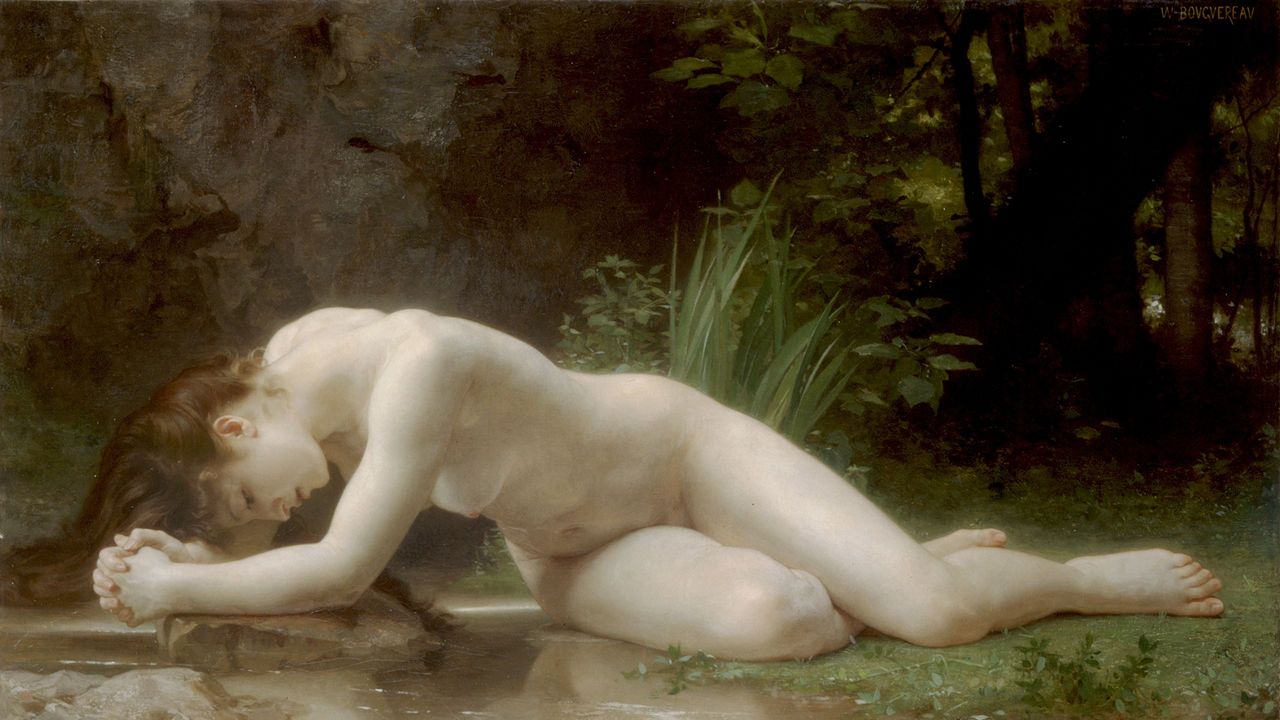 The ultimate goal for any student, no matter their school or specific atelier, who wanted to become successful was to get their work accepted into the Salon. This was an annual exhibition of artwork screened by a committee that was, well, slightly corrupt. They chose pieces based on bourgeois taste–which tended, at the time, towards the idealized and the classical–and upon the submitting artists’ own connections.

As a result, it was extremely important to have a good mentor in the art world, usually the master of the atelier you attended. Not only did your mentor teach you the fundamental techniques of drafting and painting, but he also ideally had good connections to the Salon higher-ups, and could then put in a good word for you come selection time. Bouguereau was a particularly desirable teacher because he had incredibly good Salon connections and a fantastic reputation. Moreover, the relationship worked both ways — Bouguereau’s reputation helped his students, but the fact that the students’ atelier and master were printed on Salon wall labels publicized Bouguereau’s atelier and status, too. 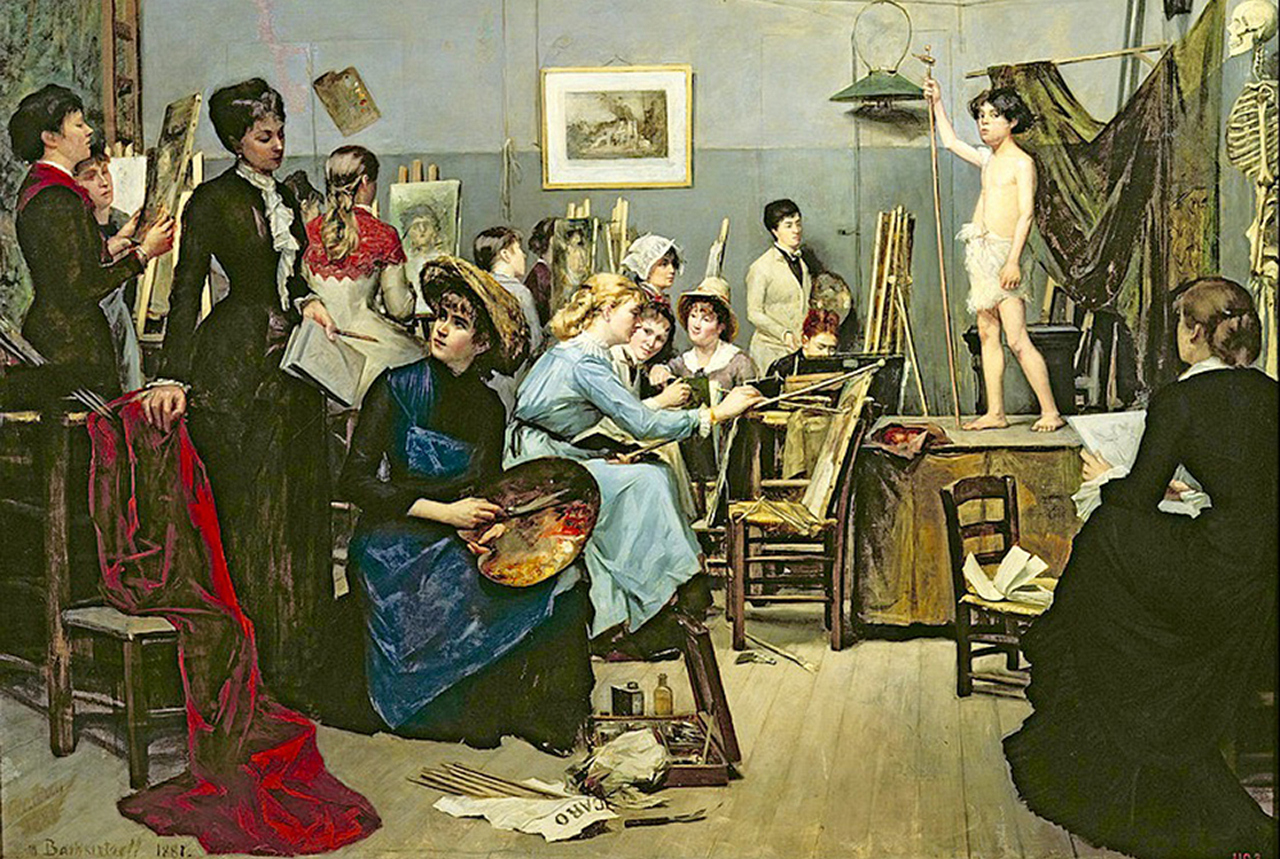 No matter which art school or atelier a student worked in, each had to follow the same strict regimen in what they could draw first. They began by meticulously copying lithographs and engravings (prints) of masterworks. Then they moved onto sketching plaster casts of classical and classically-inspired statues. Finally, they could sketch the live nude, and after they mastered that, they could paint it. The live, human nude was considered the highest, most important thing one could depict.

Though we might expect Bouguereau’s teaching style to be quite conservative, considering his popularity among the bourgeois and Salon committee, it seems that his teaching style was significantly different then how it was usually done at the time. First, let’s look at the painting to the right, Chalfant’s Bouguereau’s Atelier (1891). Chalfant was an American student of Bouguereau’s, and here we can see a sketchy painting of the very atelier in which he worked. There are two nude models, and many students, who are all seated hierarchically — students who won atelier-sponsored contests (best allegorical painting, etc.) won seats closer to the model. Also hierarchical are the very sketches and paintings on the walls: charcoal sketches at the back, portraits hung higher up, and color figure paintings overtaking the entire back wall.

Bouguereau believed that a person is “born an artist,” but that they learn by doing — in that vein, he never manually corrected a student’s work, attacking their sketch with his own pencil, as many teachers did, but rather critiqued with his words, allowing the student themself to fix their mistakes. One student wrote that he had a “gentle, soothing voice; [he] glided… always gentle, always fair, never saying things he did not really mean” (Edmund H. Wuerpel). Moreover, unlike many masters, he never forced his students to follow his own style, although there were a fair number who chose to — including his student and eventually wife, Elizabeth Jane Gardner, and Pierre-Auguste Cot.

Cot was a very successful artist who was one of Bouguereau’s few students to have a nearly familial relationship with his master. His works were frequently in the Salon, and he won many awards from the selection committee. One of his most famous paintings is to the left, Springtime (or Spring, c. 1873), which was so beloved it was reproduced in countless ways — from prints to playing cards, even to wallpaper. 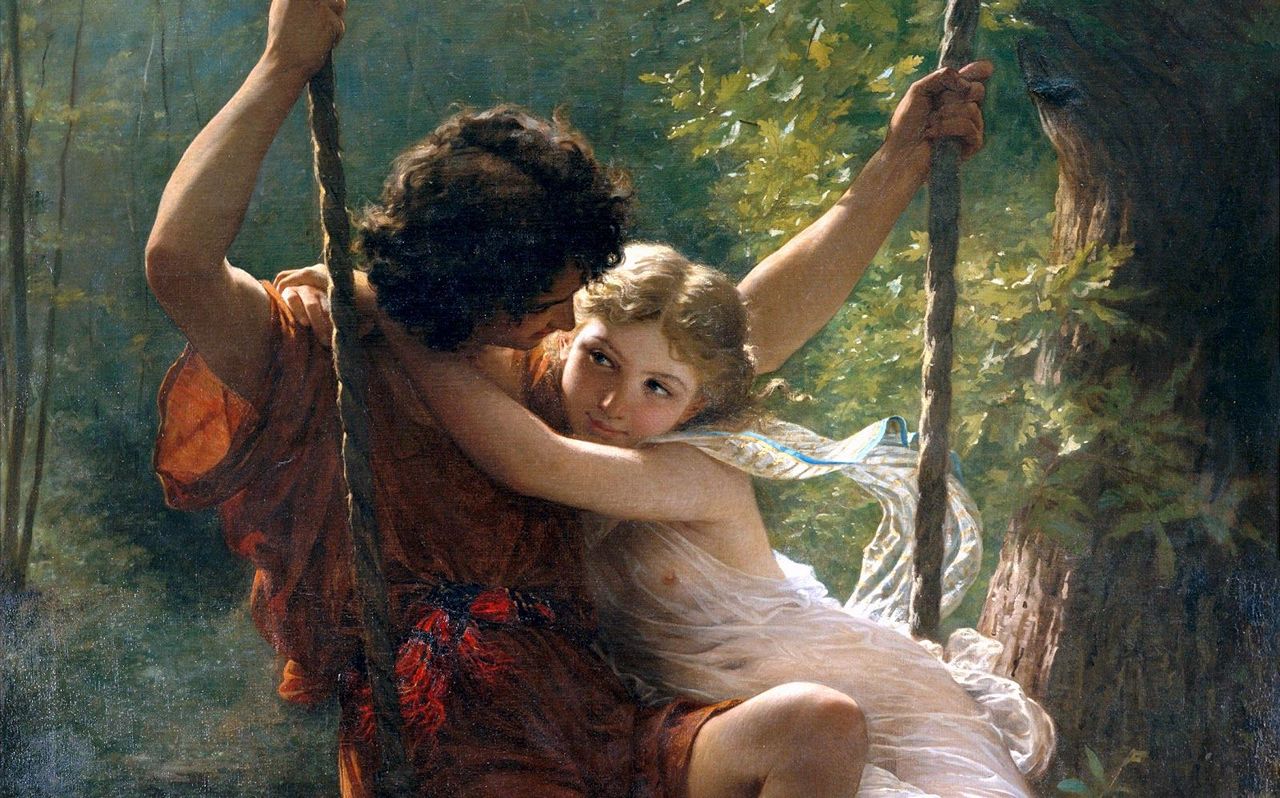 This work is remembered as the quintessential Academic artwork, although this was not necessarily THE ideal that the Salon insisted on. Nevertheless, its polished, idealized young figures, the allegorical overtones, and the Arcadian setting are not only very Academic indeed, but quite Bouguereau-ian, too. Bouguereau’s influence on his students was quite great, perhaps because of his unconventional, but quite effective, teaching style.

The Hood Museum of Art in Hanover